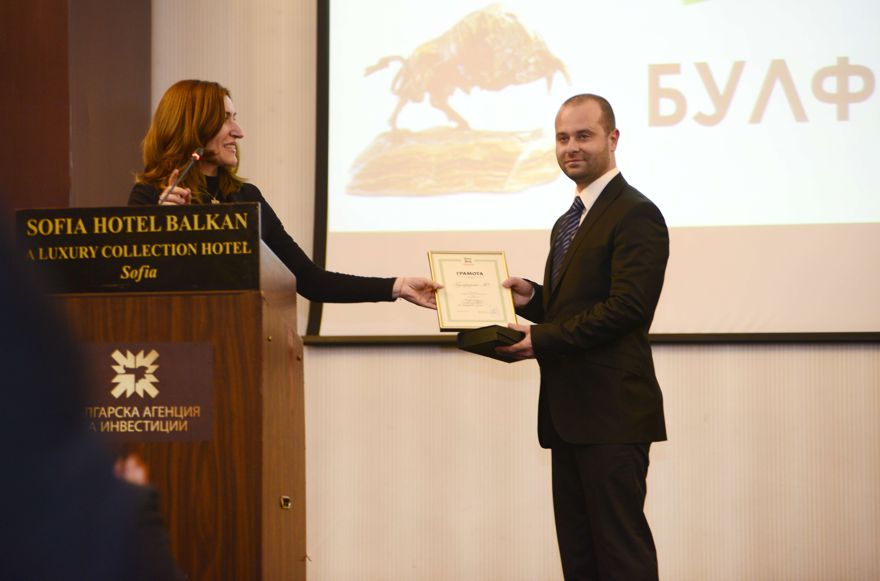 BULPHARMA won for the second time the prestigious “Investor of the Year” award. The company was awarded in the category “Investment in conquering market share” for 2014 in competition with another 25 nominated companies from the Bulgarian Investment Agency. In 2014 BULPHARMA invests over BGN 58 million in the Bulgarian economy, making its largest investment in the construction of new medical buildings and the purchase of new modern equipment in the modern University Hospital in the capital – Sofiamed and in Plovdiv – in Pulmed Hospital.

During the award ceremony, the member of the Management Board of BULPHARMA, Nikola Tikov expressed his satisfaction with the next recognition of the company by the Bulgarian Investment Agency, and assured that BULPHARMA will continue to be one of the major investors in the Bulgarian economy and the most the largest private investor in Bulgarian healthcare in 2015 as well.

Two months ago, BULPHARMA won an award in the national competition “Building of the Year” 2014 for its investment in the newly built buildings of the Plovdiv hospital “Pulmed”.

BULPHARMA is a company with a 17-year history, which started with the main activity of wholesale distribution of medicines for the Bulgarian and international market. Since 2000, BULPHARMA Ltd. invested in the field of healthcare and in the same year made the first in Bulgaria privatization of a public health institution in Pazardzhik. Since then, the company through privatization and its own construction has created 6 hospitals and 7 clinics throughout the country. The largest of the 6 hospitals is MBAL “Sofiamed”, which has 550 beds. The structure of BULPHARMA Ltd. employs over 3,000 people. Since its establishment until today, the company has acquired majority stakes in 31 companies in addition to healthcare, as well as in pharmacy, construction, public transport and logistics, production of construction materials, real estate management etc.

The awards of the Bulgarian Investment Agency (IBA) will be presented for the 9th consecutive year for the most significant investment projects implemented in Bulgaria in 2014 to companies, that have made a significant step in their development through sustainable and efficient investments, opened new jobs, places committed to the introduction of high technology. This year, the evaluation was also guided by whether the companies have invested in environmental protection measures.

previous
Dr. Mihail Tikov, owner of Bulpharma, with a donation to the Ministry of Health and citizens
next
BULPHARMA company with class A investment certificate from the Bulgarian Investment Agency